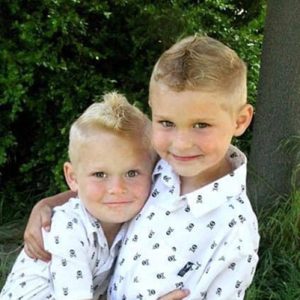 Brothers Rusty and Bear have both struggled to communicate their feelings and emotions with their family.

Rusty, the oldest brother, had to have surgery at 18 months. “After a successful surgery, we noticed that what little words he was saying he soon stopped,” his mother, Nicki, said. “We learned that the anesthesia can cause regression in speech.”

The family was referred to Kids Who Count where his mother said they were “granted our angel,” Child Development Specialist Linda Lange.

“Linda came every month and felt like a part of our family,” Nicki said. “Rusty responded so well to her and began making progress.”

Then Linda noticed that Bear, the younger brother, was also struggling to communicate. Soon both of the boys were in the Kids Who Count program.

“They always looked forward to her visits and never liked it when she left,” Nicki said. “Bear was diagnosed with a lisp and tongue thrust in addition to his speech troubles, but Linda gave us the skills we needed to help him through and for us to understand him better.”

Rusty is now 4 years old and Bear is 3. They never stop talking and love telling stories and sharing everything with their family.

“It’s all thanks to Linda and Kids Who Count,” Nicki said.