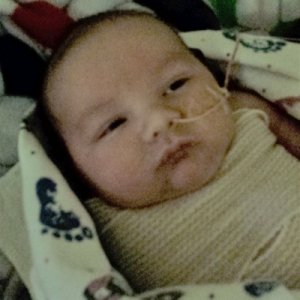 Eric is 20 months old. He was placed on an IFSP in November 2016 due to receptive/expressive language concerns. He has a three-year-old brother and his mother just gave birth to their 3rd son, Ian. Eric has had 2 home visits by Linda Lange.

Ian, Eric’s little brother, was born on December 19th weighing 9lbs 7oz. He has shoulder dystocia and as a result, his right humerus was fractured and he has brachial plexus injuries in both arms. His lungs were immature and he needed c-pap therapy and then oxygen for a while.

He is still in the NICU, learning how to eat on his own. There is movement in both arms and he is making progress. Sara, Eric and Ian’s mom, contacted KWC so we are aware of their family situation (she spends most of the day at the hospital) and she wanted us to know of Ian because he also might need services through KWC.