The Value of Early Intervention

Tel Morris began walking at the age of 14 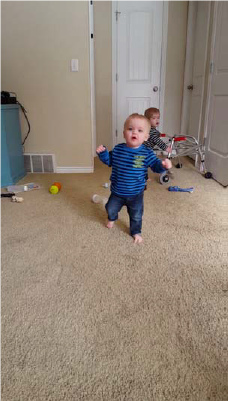 months, just two months after his twin
brother Renn. What makes this story worth telling is that when their mother Lacey was 28 weeks pregnant, she was informed that Tel’s brain did not form properly. When the twins were born, the prognosis for Tel was dismal. Lacey was told that Tel probably wouldn’t walk or talk. Right on target for milestones, at six months his brother Renn started rolling over and crawling and Tel was not. That is when Lacey was referred to the Provo Early Intervention program.

“Baby Watch Early Intervention is a federal program under the Office of Special Education,” said Janet Wade, Senior Director of Family Support and Transition Services at Easter Seals-Goodwill. In Utah County there are three early intervention programs associated with the three school districts: Provo Early Intervention supports Provo School District, Kids on the Move for Alpine School District and Kids Who Count, located in Salem, which serves the population in Nebo School District. Services provided through early intervention programs are based on the needs of the child and the family and include physical therapy, occupational therapy, speech language therapy, nursing, a dietitian, developmental therapy and service coordination. Many of the services are provided in the home, and family members are trained to continue those services each day. The number of children who participated in early intervention in Utah County in 2013 was 2,611 and year to date for 2016 the numbers are already at 1,800. If these numbers continue to grow at this pace, an increase of 53 percent is anticipated by June of this year.

Despite these high figures, research shows that there are many children in this age group who are not yet receiving early intervention as only four percent of children between birth to three years old have received early intervention services, yet 12 percent of children in school have Individual Educational Plans (IEPs). The concern for all of the statewide early intervention programs is that there have been no increases in funding to the programs since 2013 regardless of the increasing numbers
requiring services. The fact that all eligible children must be given services makes it necessary to have the qualified staff to perform these services. “Ninety percent of our program costs go directly to staffing,” said Kelsey Lewis, MSW and Executive Director of Kids Who Count. “The only place that we can cut costs to coincide with the increase in children is to reduce our staff.” Janet Wade explains the impact. “That means instead of having a physical therapist visit a family twice a month, it will have to only be once a month,” she said. These decreases will ultimately reduce direct care and long-term outcomes and benefits of school readiness, social growth and independence are less likely to be achieved.

Additionally, fewer infants and toddlers may be determined eligible, restricting eligibility to children with the most severe risk of disabilities. Simply put, should we continue without the necessary funding, the social, educational and economic consequences are deferred to the future when they are most costly and less effective. The benefits of increasing funding to early intervention are evident. First from a monetary standpoint, statewide, 35 percent of children who had early intervention did not require
additional special educational pre-school services. The second is that since 85 percent of brain growth is developed by age three, it becomes more critical to intervene during these important years. Tel is a walking example to the benefits of early intervention. By receiving the services and equipment he needed, he was able to defy his early prognosis. The most important benefit to his family, however, was the ability to have a therapist come into their home and teach them the skills and techniques they could use as the performed the typical day to day tasks of taking care of him. In a couple of years, Tel and his twin brother Renn will be able to walk into elementary school together thanks to his experiences with early
intervention.

If you or anyone you know has ever experienced the many benefits of early intervention, now is the time to contact your local legislators and encourage them to make the changes necessary to have these funds increased to meet the growing needs of our community.

adminParticipants in Early Intervention Programs Increasing, Funds Are Not03.18.2016