A celebration of success in Salem 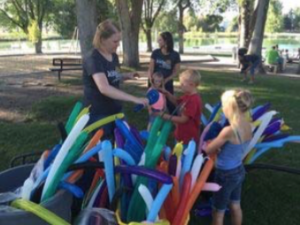 August 31 was a beautiful day for a picnic, specifically the picnic at the Salem Pond Park organized by the staff of Kids Who Count. Kids Who Count is an early intervention program in Salem that provides services to infants and toddlers living in the Nebo School District.

“It was the first picnic we have had in three years,” said Melanie Linford, the program’s associate director. “With approximately 200 children currently enrolled, the picnic gives their families and staff an opportunity to get to know each other.”

One of the families in attendance was that of a young man who had completed the program many years ago, but, like all of the children, has never been forgotten. His history with Kids Who Count began 13 years ago when his mother was at 26 weeks gestation.

“In my 20th week of pregnancy,” his mother Janae recalled, “an ultrasound revealed that my baby would be born with severe developmental disabilities. The doctor’s prognosis was bleak.”

Feeling helpless and afraid, Janae immediately started searching for resources that could help. “I was an experienced mother with six other children, but had no idea what to do,” she said. She was referred to Kids Who Count and began what would be a very long association. “Two weeks after we brought [Alex] home, Kids Who Count arranged to have a physical therapist, nurse and nutritionist meet with me. They became my lifeline by providing a variety of supports including play groups, a walker when he was three and many developmental toys.”

After completing his work with Kids Who Count, Alex went on to attend both Sage Creek and Westside Elementary schools and is currently a student at Maple Mountain Junior High. “He plays soccer, baseball and basketball with the VIP League in Mapleton, reads small books, loves to sing and is very outgoing with those around him.” Janae credits his successes to his early intervention supports.

Janae and Alex were just two of the attendees at the picnic and were among other families who currently have children in the Kids Who Count program. One such family was Kathryn Jex and her daughter Natalee, now almost three years old. Natalee began attending early intervention at six months old after being referred by her neurologist.

“When Natalee was around six months, I noticed that she was not having any visual responses to sounds or lights,” Jex said. “I reported this to her pediatrician who noted other concerns and referred her to a neurologist who recommended early intervention.” With the help of the early intervention staff at Kids Who Count, Natalee went from being completely unresponsive to being prepared to start pre-school.

“I can’t imagine how she would have made progress without this program,” Jex said. “They have also been able to teach her ways to cope when things get difficult.”

These are just two of the amazing children at the picnic who fed the ducks and played on the playground like hundreds of other children do at Salem Pond. The only difference is that these two children, and the others like them with disabilities, had a more difficult journey getting to the pond that day. That is why the one message that both Janae and Jex wanted to send to other parents is that if you think there are any delays with your baby such as weight gain, speech, motor skills etc., do not be afraid, embarrassed or ashamed but seek out help immediately. There is so much help if you look for it.

“There is so much help that I wasn’t aware of,” Jex said. “To see the progress Natalee has made even in the last couple of months is worth it all.”

adminEarly intervention makes all the difference09.10.2015